We encountered a question on " osmotic Nephrosis" that led to a discussion.
What is that and what are its causes?
It is renal injury that is "tubular" in nature secondary to hyperosmolar substatnces
You will see vacuolization and swelling of the tubules and a finding that might look very similar to " CNI toxicity" to a certain extent. But CNI injury is different and there other findings in that case.

Why is it called "osmotic" Nephrosis? Who knows. Since the vacuoles are happening due to large amounts of hyperosmolar solutes but these solutes enter the tubular cell via pinocytosis and not osmotic forces.

Things that cause it:
Increased starch in "anything" usually older forms of IVIG
Hetastarch
Mannitol
Contrast dye
Dextran

Its usually reversible and most important preventable 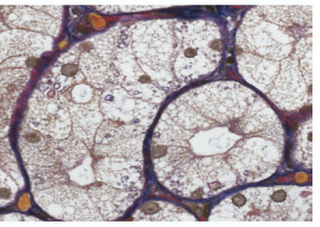