In the News: It's not the kidney, It's the environment it's in!

A recent report in the NEJM describes a case of recurrent FSGS.  A patient with FSGS was given a kidney from his sister and developed recurrent FSGS. Recurrent FSGS occurred within days after transplantation with over 10 grams of proteinuria. That kidney was removed and then re transplanted in another individual with known diabetic nephropathy.  The kidney functioned very well and months out had normal renal function and no proteinuria.
This single case can be very enlightening in terms of the pathophysiology of FSGS post transplant. This might suggest that sUPAR is a major player. It enlightens us to the fact that the problem lies in the environment the kidney is placed in and not the kidney itself.
The once challenged thought of permeability factor causing FSGS is becoming more and more a reality of this disease entity.

Isotretinoin and the Kidney

Acutane has been used for severe acne in cases. In certain dermatology practices, aside from monitoring serial pregnancy tests due to the severe teratogenicity of this product, they check monthly UA to monitor for proteinuria.
After a long literature search I found one letter to the editor, in NDT in 2000 describing a case of nephrotic syndrome(minimal change disease) in someone treated with acutane.
There was also mention that “mild proteinuria had been reported 60 times, in most  cases with a temporal relationship. “ And they also stated that the “international product information lists proteinuria as a potential complication.”   In the FDA product labeling, all I could find was to monitor “urine for white blood cells, proteinuria, gross or microscopic hematuria.”
But there are rat models which demonstrate some antiproliferative effects and amerioration of renal damage using these agents.
So should we be stopping our patients with proteinuria from taking this medication? Or can this medication be beneficial to our patients with chonic  kidney disease?


WHICH TWO KIDNEY BIOPSY FINDINGS ARE MOST ASSOCIATED WITH CLINICAL FINDINGS OF CLL?

Da’as et al describe cases of biopsy proven glomerular diseases in patients with lymphocytic leukemia and or non Hodgkin’s lymphoma.  They found 42 cases of glomerular diseases with CLL.  The most common glomerular lesion was MPGN(35.7%). The second most common lesion was MN(19%).  Recently, an association between MPGN and monoclonal gammopathy of uncertain significance (MGUS) has been reported.  Sixteen of 28 patients with monoclonal gammopathy had a normal bone marrow biopsy and were classified as having MGUS.  Renal biopsy, however, showed granular immune deposits which correlated with serum or urine monoclonal proteins.  This study also showed that MPGN with monoclonal gammopathy can be seen in the setting of other lymphoplasmacytic diseases, including low-grade B-cell lymphoma, CLL, and multiple myeloma. MPGN diagnosis might be the first sign of a forthcoming lymphoplasmacytic malignancy.  Recent studies have noted that Immunotactoid GN (ITG) tends to occur at an older age and maybe associated with lymphoproliferative disorder and malignancies, typically paraproteinemias or CLL.  Compared to ITG, fibrillary GN  is not as strongly associated with neoplasms. So, given above findings, most likely findings would be MPGN, and Immunotactoid GN.  Membranous GN would be correct but was not an option. Proliferative and fibrillary are less likely as is tubular interstitial disease.

The international nephrology education foundation or INEF was founded in 2010 by Dr. Meguid El Nahas from United Kingdom.  Its a charitable foundation to fund and support training, education and leadership in Nephrology and Medicine in emerging countries.

It is the same leadership as for the Global Kidney Academy website.  Have a look at this excellent resource for many.

Predictors of Membranous GN in cancer

The strongest predictors of cancer as a cause of Membranous GN are:
1. Smoking
2. Advanced Age
3. Leukocytic infiltration of the glomeruli( eight leukocytes per glomerulus has a sensitivity of 75% and specificity of 92%)
For an interesting case discussion regarding this, visit CJASN's attending Rounds on Nephrotic Syndrome in an older patient
Posted by Kenar D Jhaveri( kidney 007) at 3:57 PM No comments:

A 56 year-old male with a past medical history of insulin-requiring DM2, hypertension and ESRD on peritoneal dialysis with icodextrin was hospitalized for viral gastroenteritis. His GI symptoms were improving with symptomatic management but his glycemic control was worsening, with random capillary blood glucose values ranging from 180 to 300 mg/dL. He was maintained on regular insulin coverage based on a sliding-scale, with subsequent capillary blood glucose values between 150-180 mg/dL. The patient complained of recurrence of vague GI symptoms, which were attributed to the primary diagnosis of viral gastroenteritis. On the third day of hospitalization, he developed seizures and a 'code' was called. Bedside capillary blood glucose was 90 mg/dL.  His venous blood glucose was measured by the central laboratory as a part of the seizure work-up during the code, and was found to be 15 mg/dL. Administration of glucose led to resolution of his symptoms.

Point-of-care testing with standard glucometers used in hospitals (Accucheck) results in spurious elevations in blood glucose levels in icodextrin-treated patients. Icodextrin may be absorbed in the systemic circulation and is hydrolyzed into maltose and maltotriose. Maltose accumulates in the systemic circulation because humans are deficient in maltase. Many bedside glucometers like Accucheck use the glucose dehydrogenase with pyrroquinolinequinone (PQQ) in their test strips, which identify the free reducing group of glucose at the end of the maltose molecule and thus overestimate the blood glucose levels. This overestimation, however, is not seen with the glucometers based on the glucose-oxidase enzymatic system (One-touch)

2011 and 2012 has seen a series of publications regarding the novel agents for anticoagulation.  The three major ones that are up for discussion are: dabigatran, apixaban and rivaroxaban. While the former is a direct thrombin inhibitor, the later two are factor Xa direct inhibitors.  The ease of use is the dosing and no need for monitoring. What about in patients with decreased GFR? The image below (T S Potpara and G Y H Lip from Nature) summarizes the novel agents. Recently, several new oral anticoagulants have been tested in large trials involving thousands of patients with AF(RE-LY, ADOPT , ROCKET -AF). All of these new anticoagulants are partially eliminated by renal clearance. In CKD patients, therefore, the half-lives of these novel anticoagulants may be prolonged, resulting in enhanced antithrombotic efficacy.


On the other hand, there might be a higher than normal bleeding risk in CKD patients with these compounds. While patients with GFR>30cc/min were included in all trials, the moderate to severe CKD with GFR<30 were not included in all three trials. It is interesting to note that of all the three new agents, only rivaroxaban is predominantly liver clearance making it perhaps the best agent of all three for CKD patients.  The ROCKET-AF trial excluded patients with an eGFR <30 mL/min, whereas the daily dose of rivaroxaban was reduced from 20 to 15 mg in patients with an eGFR of 30–49 mL/min based on available pharmacodynamic data and pharmacokinetic modelling.
So where do we stand? Unclear at this point.  While it is been suggested by the new ACCP 9th version of guidlines for thromboembolism to start using these agents, one has to watch for any post adverse events.  Especially, if there is acute kidney injury or if there is slow declining GFR, agents might have to be changed or dosages adjusted.  Time will tell.

Labels: CKD and ESRD, In The News

Check out some interesting updates from eAJKD, official blog of AJKD 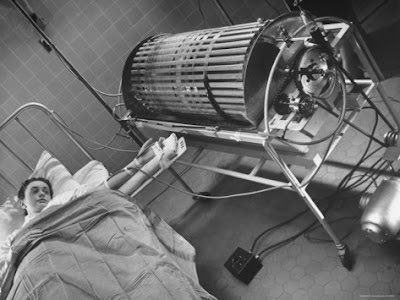 In the News: Collapsing Glomerulopathy and SLE

Collapsing FSGS has many causes but its relationship with SLE has been sparse.  Salvatore et al present the largest series of 19 patients with SLE and 3 patients with SLE like disease presenting with Collapsing FSGS.
Findings:
1. Confirmed the proliferative podocyte theory using dedifferentiation and proliferative markers in most biopsy cases.
2. Secondary causes that are more common such as HIV, Parvovirus and medications were ruled out as much as possible in most cases.
3.  Of the 19 patients, 7 had no remission, 5 had partial remission and one had complete remission and some had no follow up
4. Treatment was mainly steroids in most cases and MMF and + dialysis if needed.
5. AA race and female gender predominated.
6. Only 25% progressed to ESRD or death in this group.  This is a surprise as Collapsing FSGS usually has a 99% progression to ESRD.  The authors think this might be because of shorter follow up and or less stringent criteria for the diagnosis of collapsing FSGS.

Check out the article in CJASN
Posted by Kenar D Jhaveri( kidney 007) at 6:23 AM No comments:


PEMETREXED IS KNOWN TO CAUSE RENAL TOXICITY IN SOME CASES. WHAT IS THE PATHOLOGY FINDING USUALLY?

The classic finding with this nephrotoxic agent is Tubular and interstitial disease.

Not offering renal replacement therapy might not be an easy task. Withdrawing therapy when appropriate also might not be easy. Are our fellows comfortable in doing this? Are even the fellows in cardiology, gastroenterology, and other specialty training comfortable not offering aggressive therapy.


We are conducting the Palliative Care Experience of US Internal Medicine Subspecialty Fellows Survey. By completing this anonymous online survey, you consent to participate in this research project. This survey will help us understand the palliative care experience of current US internal medicine subspecialty fellows during their residency and fellowship training. This survey will take approximately 5-10 minutes. Your help is greatly appreciated. Thanks for your time and participation.
Here is the link to the survey:

In the News: Normal hematocrit and the quality of life

As we are learning more and more about targets of hemoglobin, a recent publication by Dr Coyne in Kidney International stuns us even more. The Normal hematocrit trial was the largest trial to date on hemoglobin targets and trying to show that a goal of 13-15g/dl was needed for better quality of life.  This trial was terminated early due to increased deaths and cardiac events in the high target groups.  The trial did show that it had improved quality of life significantly.  The new KI article compares the FDA 1996 clinical trial filed report to the actual publication given in 1998 in NEJM.

Few summary points
1. Higher quality of life was not achieved and was almost reaching statistically significance
2. Higher target hemoglobin had increased risk of death, non access thrombotic events and hospitalization rates( statistical significance) - not noted in the actual paper
3. Renal community guidelines to treat anemia were based on this original paper

Swinging of the pendulum as some call it is what is happening. More data and more data supporting not to target higher doses of hemoglobin.  The real question to ask is could the renal community guidelines be different and the early 2000s be different if this was known earlier to us as physicians.
Some of us feel disgusted by this corrupt data presentations and really applaud this author for showcasing what should have been published much earlier.

Just because a major journal publishes an article, it doesn't make the validity of the publication accurate.

Labels: anemia, In The News

As the Web 2.0 educational tools grow, face of nephrology education will be drastically changing.
Nephrology on Demand, an online tool for education from East Carolina Univ had developed a you tube video channel with video presentations from their in house speakers but also have very interesting 10 minute sessions that are in the format of the Khan academy. They make nephrology teaching very easy.
Check out their publication regarding this tool assessment.
The you tube channel is at http://www.youtube.com/user/nephrologyondemand/videos
Posted by Kenar D Jhaveri( kidney 007) at 10:30 PM No comments: