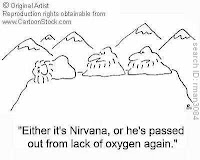 A 45 y old male with Membranous Nephropathy moved to Nepal and started living in a high altitude region. Which of these statements regarding his kidney function at high altitudes are true?

The only closest correct statement in the above is number 2( renal blood flow will increase by 8-20%). Even that is false if we look strictly at hypoxia vs high altitude.

The above question refers to the high altitude renal syndrome(HARS).  Over 140 million people live at altitudes >2400ml under hypoxic conditions and that can have physiologic renal effects.
Subjects that live at high altitudes have increase HIF production that leads to increase erythropoietin production and polycythemia.  Interestingly, as the Hct rose, one study found that proteinuria and microalbuminuria also increased ( perhaps due to increase filtration fraction). Subjects also developed larger glomeruli.  Interestingly, hyperurecemia and hypertension was also noted. Given increased HTN and proteinuria, cardiac complications increase.
Renal blood flow (RBF) increases 8 to 20% during acute hypoxia, then returns to baseline after several days. The effect on GFR is similar. In high-altitude residents, RBF is decreased 12% and renal plasma flow by 30 to 40% largely as a result of secondary polycythemia. Because the filtration fraction increases by 39%, however, GFR falls by only 12%. In addition, whole organ oxygen delivery, arteriovenous content gradients, and consumption are also maintained at levels equal to sea-level values.
Acute hypoxia generates acute hypocapnia. Over several days, the kidneys increase bicarbonate excretion to compensate for this respiratory alkalosis, thereby blunting the inhibitory effect of respiratory alkalosis on the hypoxic ventilatory response and improving oxygenation over time at altitude.