Based on Lancet Article that gives a better ddx for Gap acidosis
http://www.thelancet.com/journals/lancet/article/PIIS0140-6736(08)61398-7/fulltext

Last year, a prospective study was published in JAMA suggesting that having a history of kidney stones as an independent risk factor for cardiac disease (CHD).
In short, this was a prospective study of 45 748 men and 196 357 women in the United States without a history of CHD at baseline who were participants in the three study cohort registries. Coronary heart disease was defined as fatal or nonfatal myocardial infarction (MI) or coronary revascularization. The outcome was identified by biennial questionnaires and confirmed through review of medical records.
Of a total of over 240,000 participants, over 19,000 reported a history of kidney stones. After up to 24 years of follow-up in men and 18 years in women, 16 838 incident cases of CHD occurred. After adjusting for all confounders, amongst the 2 cohorts of women, a history of kidney stones was associated with a modest but statistically significantly increased risk of CHD; there was no significant association in a separate cohort of men.
The knowledge of history of kidney stones was obtained via an independently validated survey.
When looking at the covariates, most risk variants of both formation of kidney stones and CHD were evaluated and controlled for.

1.    CHD and stone formers share the same risk factors- obesity, metabolic syndrome, DMII, HTN, high lipids but when controlled for all this, the risk of getting CHD was independently associated with history of stones
2.    Perhaps common dietary factors- sugary drinks, low calcium diet, high protein diet, but dietary adjustments were also made in the study.
3.    One adjustment that was not made was renal disease. Stone formers can perhaps have CKD and CKD becomes then a CHD risk factor.  This was not analyzed per authors in the manuscript.
What is the mechanism?
1.    Perhaps there is a unknown metabolic state that is both a risk factor for stones and CHD
2.    The stone might increase some other factor that we don’t know that leads to CHD
3.    There might be some other confounding factor we haven’t found.

Why Women: - No clear explanation can be found, perhaps an unknown factor that is not clear yet.
Major limitations: Self reported questionnaire, stone analysis not clear, most patients were white and not many blacks, Asians or Hispanics.

Very fascinating study but leaves us with more questions than answers.  At this point, would not make any major statements based on this observational study re risk of cardiac disease and stones.
Posted by Kenar D Jhaveri( kidney 007) at 10:14 PM No comments:

Cisplatin is one of the most commonly used chemotherapeutic agents.  In the US, there are more than 2000 ongoing clinical trials investigating cisplatin in patients with ovarian, testicular, bladder, cervical, and head/neck cancers, among others.  Unfortunately, approximately 25-30% of patients receiving cisplatin suffer nephrotoxicity despite its potency as an anti-tumor agent. This is a challenge in the oncology clinical setting where either dose reductions or discontinuation of cisplatin are often required to salvage the kidneys leaving the patient and clinician with limited options given the efficacy and affordability of this drug.  An important contributor to cisplatin-mediated nephrotoxicity is the accompanying electrolyte imbalances, including hypomagnesemia. Magnesium (Mg) is an essential dietary mineral required for normal body functioning and cellular processes.  Surprisingly, Mg consumption (via foods and supplements) among most Americans, particularly the elderly, is below the recommended daily allowance. In addition, many medications and disease conditions reduce the availability of dietary Mg. Therefore, we sought to examine the effects of Mg deficiency and Mg supplementation following Mg deficiency on cisplatin-mediated acute kidney injury (AKI) using a mouse model.  We observed that Mg deficiency exacerbates cisplatin-induced AKI, whereas correction of Mg status protects against cisplatin-mediated AKI.  Additional studies detail the cellular and molecular mechanisms by which Mg provides renoprotection, namely by attenuating cisplatin-induced inflammation, oxidative stress and apoptosis. In addition, we show for the first time that Mg supplementation reduces the platinum accumulation in the kidneys possibly by affecting the efflux of cisplatin by the renal epithelial cells.  While protecting the kidneys, Mg supplementation did not compromise cisplatin-induced cytotoxicity using several human cancer cell lines, suggesting the Mg does not interfere with the chemotherapeutic efficacy of cisplatin in vitro. The results of this study warrant future large scale clinical studies to better monitor patients’ Mg status prior to and during cisplatin treatment and to develop improved Mg supplementation protocols that provide nephroprotection without compromising cisplatin’s potent chemotherapeutic efficacy.

The First Ever Nephrology Spelling Bee 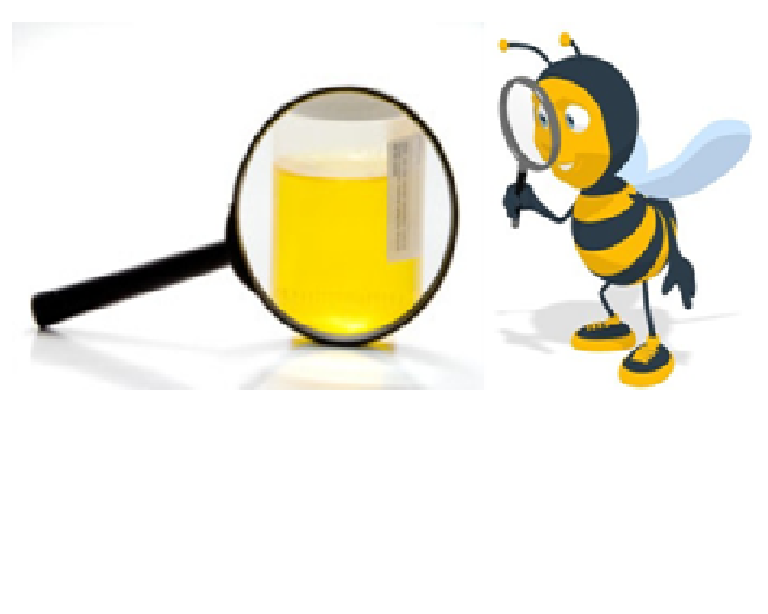 For the first time ever ( to my knowledge), we conducted a Nephrology Spelling Bee competition for our residents and trainees.  It was like the ESPN format of the show.  Nephrology faculty prepared tough nephrology entity related words. Residents were allowed 1 minute to try to spell the word. They could ask 2 questions regarding pronunciation and using it in a sentence.  If they got it, they moved to the next round. If they got it wrong, they got eliminated.

Following the word, a PowerPoint slide was shown with the correct spelling followed by an academic question attached to the word for the trainees. The correct answer to that question would win a nephrology text book.  The final spelling bee winner won Tennis US Open tickets.

While it was a fun event, there was teaching through the academic questions attached through the words.  A surprise host of the show was Sameer Mishra, prior national spelling bee winner from 2008( the real deal).  Check out his you tube video of the winning word.

Some of the words we used were:  amyloidosis,belatacept, podocalyxin, pseudopheochromocytoma to name a few.

Delta –Delta or corrected HCO3- where is this other disorder hiding?

Often when we have a severe gap acidosis, we are forced to calculate the “delta/delta” and look for either a non gap acidosis or met alkalosis. How does this work?
Let’s work an example:
Ph 7.1, AG is 22 and serum Hco3 is 10 with a premise of AG metabolic acidosis.


Problem with this method: Assumptions about all buffering occurring in the ECF and being totally by bicarbonate are not correct. Fifty to sixty percent of the buffering for a metabolic acidosis occurs intracellularly.

As a general rule, in uncomplicated lactic acidosis, the rise in the AG should always exceed the fall in bicarbonate level.

The situation with a pure DKA  is a special case as the urinary loss of ketones decreases the anion gap and this returns the delta ratio downwards towards one. A further complication is that these patients are often fluid resuscitated with 'normal saline' solution which results in a increase in plasma chloride and a decrease in anion gap and development of a 'hyperchloraemic normal anion gap acidosis' superimposed on the ketoacidosis. The result is a further drop in the delta ratio.

A recent article by Dr Sally Marshall in ACKD reviews the natural history of CKD in diabetic patients and reviews the old and the new view of looking at Diabetic Nephropathy. Highly recommend this article for everyone to review.  Here is a short summary of the review.

Low levels of albuminuria( rather than microalbuminuria) is a reversible phenomenon in majority( likely representing more of a hemodynamic change, inflammatory change or endothelial injury rather than structural damage in the kidney)
Higher levels of albuminuria are more likely to progress to proteinuria.
Peak incidence of diseases now ranging from 16-30 years
Atypical forms of presentations are becoming common where GFR decline can be seen without any prior proteinuric variant.  A vigilant watch is needed to notice this “non classical” DN
Finally, young adults are being effected with this entity and CKD become more of a common disease in Type 2 DM at an earlier age.

Which one of these drugs is the most common culprit in acute allergic interstitial nephritis now?
Amoxicillin 13%
Omeprazole 37%
Ciprofloxacin 24%
Ibuprofen 24%

Classically, drug induced AIN has been most commonly linked with antibiotics and NSAIDS. Recently, PPIs have emerged as a more common cause of AIN than the other drugs. This might be due to the massive use of these agents for almost all patients that are admitted to the hospital for ulcer ppx.  A recent study from Mayo Clinic looked at biopsy proven AIN in a single center retrospectively and identified the culprits. Drugs were 70% of the causes followed by autoimmune diseases. The most common class of drugs were antibiotics followed by PPI and then antibiotics. But overall, the top 3 causes were omeprazole, amoxicillin and then ciprofloxacin.  Patients with PPI induced AIN were older, not as symptomatic and had longer duration of drug exposure till getting kidney biopsy.
Posted by Kenar D Jhaveri( kidney 007) at 2:24 PM No comments:

What is the mechanism behind this entity that we see so frequently?
If we look at it from different sites of injury, there is data to support each one of these theories.

Podocyte injury: leading to podocytopenia or foot process effacement and leading to apoptosis, degradation or lack of proliferation.

Vascular insult:- leads to ischemia that can lead to tubular injury leading to proteinuria.

Which one is primary and which is secondary mechanism?  Can diabetic disease progress without albuminuria? Yes it can.
Current literature supports that diabetic kidney disease is mainly due to glomerular filtration barrier changes, changes in endothelial damage and GBM and direct injury to podocytes, Mesangial involvement is more of secondary role.   Tubular interstitial damage is also playing a role but it the former factors that if disrupted lead to ongoing proteinuria.  This explains why when we have accelerated HTN on top of diabetic nephropathy, there is increase in proteinuria likely due to increasing glomerular endothelial damage.

A nice review on this topic can be found in an article in KIfrom 2008.

Concept Map: Pathology findings in Hypertension and the Kidney 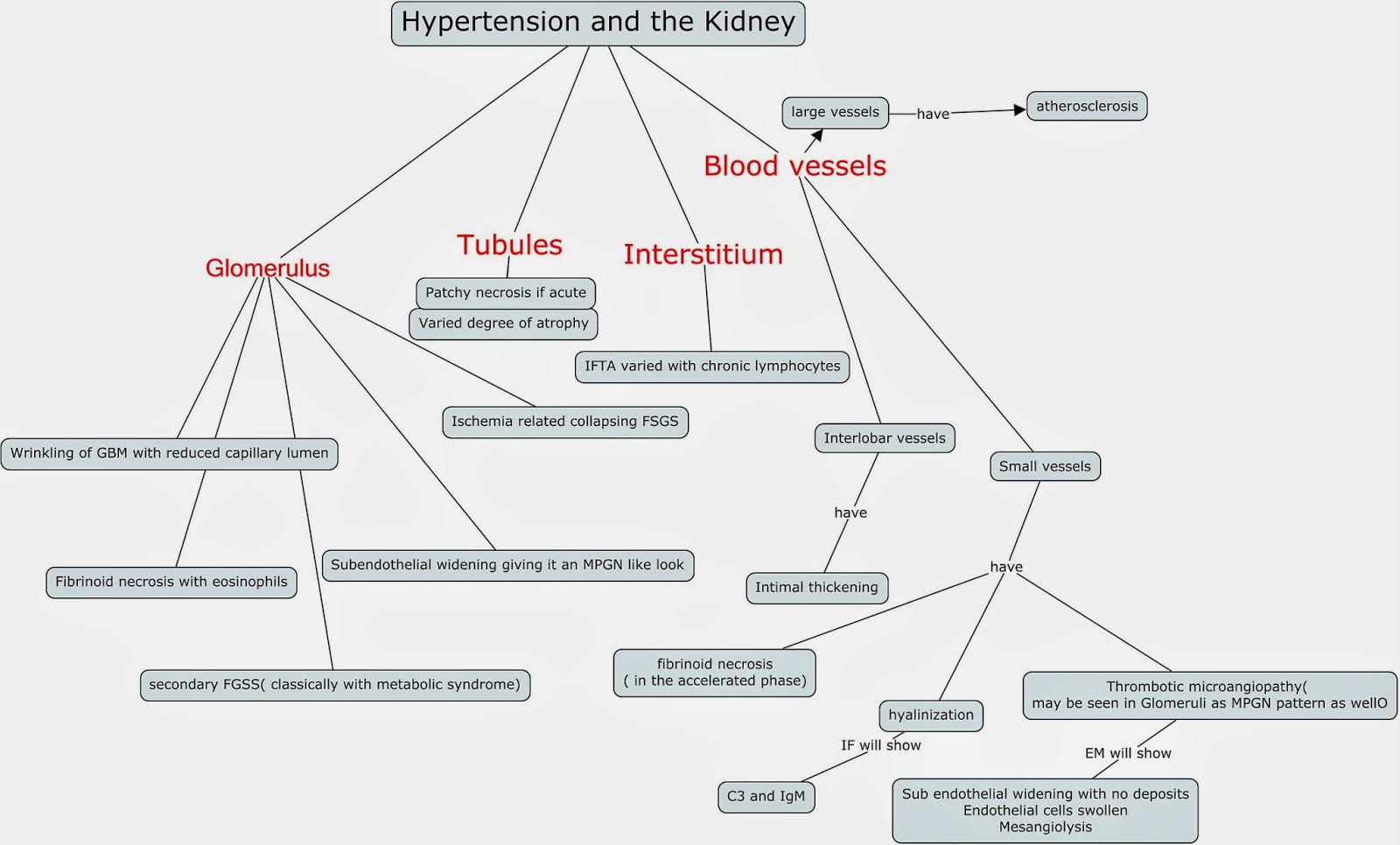 The different parts of the kidney have classic findings due to HTN. Classically, the glomeruli and vessels are the major targets.  The major "disease" categories that are associated with HTN findings are: