The new expanded third year is through the prestigious Northwell Nephrology Galdi Fellowship in Onconephrology and Glomerular Diseases. This fellowship offer a year of intensive training in these two important subject areas.

A candidate for the Galdi Fellowship will have completed internal medicine residency training, a general nephrology fellowship and demonstrate the highest level of performance and scientific and clinical potential. Candidates for the Galdi Fellowship would be carefully vetted based upon academic and other indications suggesting that advanced training as a Galdi Fellow would enable their ability to become one of a select few international leaders in glomerular diseases and onco-nephrology. The Galdi Fellowship will last for one academic calendar (July through June) year.  A new fellow will be recruited each year.Training in glomerular kidney diseases is through the Northwell Nephrology Center for Glomerular Diseases directed by Drs. Kenar Jhaveri and Purva Sharma. The fellow will work in the Glomerular Disease Center and be exposed to all aspects of glomerular disease management including a rotation with Division of Rheumatology for extra training in SLE and ANCA vasculitis. The fellow will also have the opportunity to participate in ongoing clinical trials in glomerulonephritis at the Glomerular Disease Center.

Onconephrology overlaps to an extent with glomerular diseases. Fellows gain experience both in the clinic and hospital with world renowned leaders Rimda Wanchoo and Kenar Jhaveri. Rotations will also include with hematology and oncology teams dealing with multiple myeloma, renal cell cancer and bone marrow transplant services. In addition, the fellow will have rotations with our nephropathologists as well.

The application should include1.      CV of the applicant2.      Two recommendation letters (one must be from the Nephrology Program Director of Chief)3.      A Personal Statement on the reasons for joining this fellowship.

Concept Map: Malaria and the Kidney 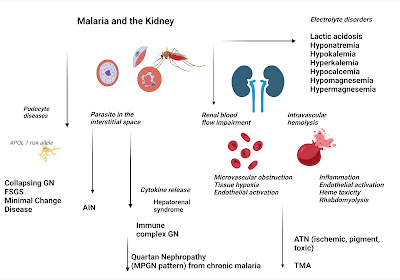 Opinion- Renal Thrombotic Microangiopathy?- Should we be calling it Renal Limited Endothelial injury or Endothelial Injury of Renal Significance

Thrombotic Microangiopathy- what’s in a name?

This is a common conversation:

“ The kidney biopsy confirms TMA”.  Great- we should ask hematology to help treat..
Hematology—“ but there are no signs of microangiopathic hemolytic anemia.. no schistocytes on smear—no need to treat”

“ The kidney biopsy confirms TMA”.  But there are no micro thrombi on the kidney biopsy. This is likely from HTN—treat the HTN.  “ but the patient has a complement factor H mutation..”.. hmm..

The problem with TMA starts with the nomenclature.  Personally, I have a problem with a series of diseases in the kidney called TMA—some have angiopathy only, some have endotheliosis, some have both and some have additional microthrombi but at the end we call all of them TMA.

Most of TMA cases are without thrombosis, only rarely would you see true thrombi.  Frank thrombosis is more common in (catastrophic) APLAS associated TMA in the kidney.

The pathology is also variable and hence should be considered to be defined perhaps with what is noted on it.

The cause of the injury than can be defined better based on history of the patient and then divided into categories as per the syndromes of TMA or better called “endothelial injury”- such as ADAMTS13 mediated, complement mediated, Drug induced ( immune vs toxic), Shiga toxin mediated, metabolism mediated, coagulation mediated and so forth. This figure is from the classic NEJM article by George et al in 2014. 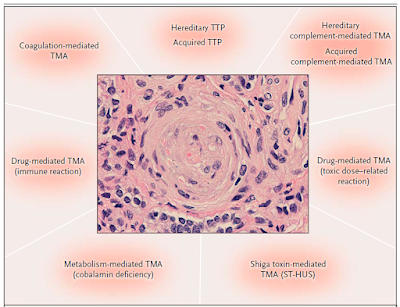 As we learn more about renal endothelial injury, perhaps a better practical terminology may be useful in defining the disease to help clinicians guide the treatment plan.
Posted by Kenar D Jhaveri( kidney 007) at 6:55 AM 1 comment: