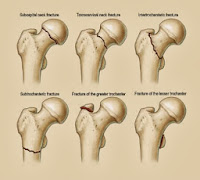 A large cause of morbidity in dialysis patients are central and peripheral fractures. We have had many pharmacological interventions that have addressed the bone disorders in dialysis patients in the last 3 decades namely: vitamin D analogs, cinacalcet, phosphate binders and better forms of dialysis. Have our changes made an impact on fractures?
A recent study in NDT that we studied looked at the USRDS data at the fracture rate per 1000 person years from 1992- 2009 and analyzed it for any specific findings regarding age, gender and race.

Key points:
1. From 1992 to 2004, central fracture rates increased from 12.5 to 25.3 per 1,000 person-years.
2.After 2004 fracture rates stabilized but did not decline( significant p value), indicating a significant increase in central fracture rates.
3. Fracture rates were approximately twice as great in women compared to men.
4. With stratification by age and race, the rise in bone fractures occurred almost exclusively in white patients older than age 65, with 22.7 fractures per 1,000 person-years in 1992 to 48.4 fractures per 1,000 person-years in 2004.
Central fracture rates have increased significantly from 1992 to 2004, mostly in white, elderly dialysis patients  and despite the availability of new treatments and guidelines. Untreated loss of bone volume and density in  dialysis patients may contribute to our findings. Interestingly, seems like there is a surge of interest in this topic    in the renal literature in 2013. Besides this study, a recent study in AJKD looked at the same cohort of patients.  Their results were similar and that showed  temporal trends in hip fracture rates among medicare hemodialysis  patients differ markedly from the steadily decreasing trend in non-ESRD Medicare beneficiaries, showing a  relatively rapid increase until 2004 and relatively rapid decrease thereafter.  The conclusion was that perhaps  the advent of cinacalcet may have created that decline. Hard to say that for sure given our findings and the  decline is there but not significant.  Some fractures in dialysis patients have been associated with low vitamin D  levels, low PTH levels, and low bone mass.  A paper in JASN this year also looked at the medicare USRDS  data set and found  pelvis/hip fractures declined slightly from 29.6 to 20.6 per 1000 patient-years between  early 2000 and late 2009, but the incidence rates for all other fracture types remained relatively  constant.  Fractures in the dialysis population are common and are associated with a substantially increased risk  for death and hospitalization. Again, similar study in CJASN.

What about mortality? Interestingly also this year in Kidney International, the DOPPS cohort was looked at.    In all countries, fracture rates were higher in ESRD patients. Fracture patients had higher unadjusted rates of  death (over 3 fold higher) and death/re-hospitalization (4.0-fold) compared to the overall DOPPS population.  Mortality and hospitalization rates were highest in the first month after the fracture and declined thereafter.

A “one size fits all” treatment paradigm for bone disease may be harmful to some dialysis patients. Further    study would be beneficial as osteoporosis and adynamic bone disease remain important occult problems in  dialysis patients. At least we know now that the older white females are the highest risk of fractures on dialysis.

What is the most common cause of proteinuria post renal transplantation?

By far, the most common cause of proteinuria post transplant as you all rightly suggested is chronic allograft failure leading to scarring and protienuria. Recurrent and denovo GN can be the remaining cases. Diabetic nephropathy is not uncommon but others are more likely to get biopsied and reported. Viruses such as parvovirus B19 can lead to collapsing FSGS, CMV can lead to FSGS. It is important to note that in those studies the classification of allograft pathology deviated from the Banff classification in that the diagnostic term “chronic allograft nephropathy” excluded allografts with any type of glomerular pathology, except global glomerulosclerosis. Hence, some forms of allograft glomerular pathology, such as transplant glomerulopathy, may be associated with CAN but it has distinct pathogenesis, clinical presentation and prognosis( and degree of antibody mediated response).  In addition, other forms of de novo glomerular disease, such as focal segmental glomerulosclerosis, are rarely present in patients with CAN and when present defines a subgroup of patients with a distinct clinical presentation and prognosis. Finally certain drugs such as sirolimus have been associated with proteinuria and FSG as well.

IN the NEWS: Obesity and organ donation

Obese uremic patients might be the next wave of patients that nephrologists will face. A recent editorial in NDT highlights this epidemic that we are starting to see. Transplantation becomes a challenge in that setting as well. But what about donors? Where is the cut off and what are centers doing?

A recent study published in Clin Transplantation presents their data on a single center looking at obese donors. Of the 104 donors that the center evaluated in that time frame, only 18% had a normal body mass index (BMI) of <25.  Over 80% of the donors spanned the overweight to morbidly obese classifications. There were a total of 23 donors (22%) who were considered moderately and morbidly obese (BMI >35).
Of these, only three (13%) succeeded at losing weight and donating.

Some key points:
1. Only 18% had normal BMI!!!! ( hence most donors are in the overweight to obese spectrum)
2. Cut off for BMI at many centers vary, some have 35 for donors and some have 30( which would turn away even more donors)
3.Given national trend of obesity, this is going to get even more worrisome.
4.Follow ups: Six-month follow-up of obese donors post donation
did not show a significant difference  between obese donors and their non-obese counterparts
with respect to estimated glomerular filtration rate or creatinine from baseline in one study.
5.Another study showed that obesity at the time of donation was associated with dyslipidemia and hypertension, two important cardiovascular risk factors, although they were not found to be exacerbated by donation.
6.Obesity may be a frequent barrier to living kidney donation, directly leading to exclusion as a potential kidney donor in about one in five instances. Successful weight loss leading to donation appears to be infrequent, suggesting need to address obesity in the donor population.
Posted by Kenar D Jhaveri( kidney 007) at 12:55 PM No comments:

Two questions:
1. What is the value of repeat biopsy in Lupus Nephritis? You have a Class III on biopsy A and improvement following treatment; 7 months later similar presentation: would you re biopsy or consider Class III and treat accordingly?

2. After induction, is a repeat biopsy needed?

Per UptoDate.com, the indications for repeat biopsy are:
1 Increasing proteinuria
2. Active sediment with rising crt
3. Rising crt
4. Unrelated to SLE as the cause of renal disease ( other GNs and drug induced diseases)

WM is a paraprotein disorder that is unique with IgM monoclonal gammopathy. Classically, what is well known is viscosity related injury that might be pre renal or tubular in nature. In addition, glomerular pathology is also not uncommon such as amyloidosis or MPGN. Tubular cast nephropathy is a rare finding with this disease but should always be considered.

Check out this presentation that I gave on some newer chemo agents and renal disease:


Newer Chemotherapy agents and renal toxicity from kdj200
Posted by Kenar D Jhaveri( kidney 007) at 9:00 AM No comments:

Primary hyperoxaluria and the Kidney

Michelis-Castrillo syndrome or Familial Hypomagnesemia with hypercalciuria and nephrocalcinosis (FHHNC)

The other day, I had dinner with the chief of Nephrology at Lenox Hill hospital in Manhattan, Dr. Michael Michelis. In the dinner conversation, he was describing his days in Pittsburg where he had once worked under the direction of Dr. Drash.  Interestingly, he was asked to see a family of siblings with an interesting tubular disorder. At that time he didn’t know what exactly he was dealing with. He called it “Decreased bicarbonate threshold and renal magnesium wasting in a sibship with distal renal tubular acidosis : Evaluation of the pathophysiologic role of parathyroid hormone” and published it in the literature. Since then, over 50 cases of similarfindings have been described: hypomagnesemia, hypercalciuria, and nephrocalcinosis. He was told by someone else that the disease has been named after him as Michelis-Castrillo syndrome.  In a recent paper in JASN, it’s quoted as “Gitelman syndrome, and autosomal recessive familial hypomagnesemia with hypercalciuria and nephrocalcinosis (FHHNC) are two hereditary hypomagnesemic renal disorders. FHHNC was first described by Michelis et al. in 1972 (Michelis-Castrillo syndrome). "  Dr Castrillo also described this entity later in the Spanish literature (Castrillo JM, Rapado A, Traba ML, Esbrit P, Hernando L: Nefrocalcinosis con hipomagnesemia. Nefrología 3:159–165, 1983), almost 11 years after it was initially described by Dr.Michelis. The disease hence gets its name now as Michelis-Castrillo syndrome.

Since then, patients of at least 50 different FHHNC kindreds have been reported. FHHNC is generally complicated by chronic renal failure (CRF) in early childhood or adolescence. Recurrent urinary tract infections (UTI) and polyuria/polydipsia are frequent initial symptoms. In addition to marked hypomagnesemia, all affected individuals exhibit hypercalciuria and nephrocalcinosis. Additional symptoms at manifestation include nephrolithiasis, abdominal pain, convulsions, muscular tetany, failure to thrive, incomplete distal renal tubular acidosis (dRTA), and hypocitraturia. Some authors reported elevated serum parathyroid hormone (PTH) levels early in the course of the disease, independently of GFR.
Posted by Kenar D Jhaveri( kidney 007) at 5:19 AM No comments:

Following the simplified Edelman equation: [Na+] = (Nae + Ke)/TBW, hyponatremia can be originated exclusively from a decrease in total exchangeable body sodium (Nae).
Can you think of clinical scenarios where this might occur and that do not involve patients drinking water or hypotonic fluids ?

What do nephrologists think?
Please comment with your responses:

What predicts risk of AKI and need for RRT in rhabdomyolysis
A large retrospective study evaluated this and found: female sex, age, cause of rhabdo, initial crt, CPK, phos and calcium and bicarbonate levels were independent predictors.
A risk predicting calculator can be found at link below
http://www.brighamandwomens.org/research/rhabdo/default.aspx

Variables that received highest scores were:

Interesting, many cases would be missed if we just relied on the anion gap. Interestingly, such an old study done in 1990s: probably worth re looking at this phenomenon and why?