IN THE NEWS: Hydroxyethyl Starch and Ringer's battle it out in NEJM

Hydroxyethyl starch(HES) has been used for volume resuscitation.  It is amylopectin+ hydroxyethyl groups in 0.9% saline or LR.  40-64% of it is excreted by the kidneys.  It is reabsorbed via pinocytosis and no enzymes exist to metabolize the intracellular substances and this leads to accumulation of cellular water and osmotic damage. This can also be seen in IV sucrose or dextran induced injury. This is similar to some forms of IVIG induced injury. Risk factors associated with renal injury have been described as prior CKD, DM, old age, large HES volumes>1 liter.  We as nephrologists have always been skeptical of this agent as its association with osmotic nephrosis.  The first case evert described of osmotic nephrosis with HES was in a kidney transplant patient. A recent NEJM publication looked at a multi centered, blinded trial that randomly assigned patients with severe sepsis to either 6% HES or LR at a dose of 33ml/kg of IBW per day.  The outcome was death and dependence of dialysis. The results showed a significant increased risk of death or dependence of dialysis at 90 days in HES group compared to LR.   The VISEP study had observed similar results but had lower power than this study. This study was randomized and also was international and included university and non university settings. A cochrane review done on this topic prior to this study was not conclusive.  In that meta analysis of 34 studies, it showed that HES had adverse kidney effects mainly in septic patients versus non septic patients. Long terms toxic effects of HES can be seen not only in kidney but in other organs such as bone marrow and liver as well.

After these trials:- probably should be avoided especially in high risk group.
Take a look at a prior post on this topic.
Check out the article in NEJM.
Some articles that might shed some light on the damage done on cells by HES are presented here
http://www.anesthesia-analgesia.org/content/110/2/300.full
http://www.ncbi.nlm.nih.gov/pubmed/12811231 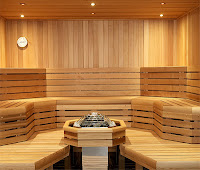 Anuric patients on dialysis can loose fluid and auto UF via sweating?

Sweating can be used as an effective way of losing salt and water for dialysis patients. A recent thread on nephrol group discussed this very topic and anecdotal cases suggested that this has been tried and worked in the past. If someone is sweating fair amount between dialysis, is it possible for them to not gain enough weight to not need UF on the days of dialysis? Stimulated sweating in a sauna has been used therapeutically in a case report described in 1978. Couldn't find many reports of Sauna being used for treatment of UF on days of dialysis but perhaps it would work as well.  One case published in recent times is interesting.
Posted by Kenar D Jhaveri( kidney 007) at 6:53 AM 2 comments:

A recent NY Times post discusses findings about recent study done in Harvard regarding empathy being taught to physicians. This is an important finding.  Certain personality types have been associated to enter different specialties in medicine. Empathy should still be part and parcel of being a good physician.  Empathy is always mentioned and modeled in medical school but somewhere during residency and fellowship, many physicians become dehumanized. Maintaining humanism and empathy while going through training is an important part of being a physician.  I think this article in NY times is a must read for all.
http://well.blogs.nytimes.com/2012/06/21/can-doctors-learn-empathy/?partner=rss&emc=rss

Some interesting postings regarding empathy and nephrology have been published. A post from Australia regarding nursing and nephrology patients and a concept of limited empathy is surprising.
A renal blog from India also had something to say about empathy and sympathy.
While we keep up with the fast paced technological advances and fast pacing medical knowledge, we must not forget about empathy in medicine.

The ESRD quality incentive program changes again in 2014. There will be more quality measures added and more complex scoring. A recent review in Kidney International is a must read for all.

A must read for all nephrologist!
Posted by Kenar D Jhaveri( kidney 007) at 6:19 AM No comments:

Labels: hemodialysis, In The News, scoring

eAJKD: Myeloma and the Kidney

Test your knowledge on the latest on eAJKD's post
http://ajkdblog.org/2012/06/14/test-your-knowledge-myeloma-and-the-kidney/
Posted by Kenar D Jhaveri( kidney 007) at 3:06 PM No comments:

As we have been overturned by the social media revolution and iphonetizied, when an individual actual calls you or talks to you and listens, its a rare finding.  Similarly, in medicine and in all specialties, we are seeing everyone engaged in their ipads, iphones, electronic records, computers and there has been a loss of humanity. A recent report said that our attention average span of 12 minutes went down to 5 minutes in the last decade.
Part of being a good physician is being a good listener and observer. How and when are we observing and listening if we are constantly texting and tweeting?

A nice article in the Wall street journal sheds light on this very issue. It highlights a major program in Yale School of Medicine on using museums as a way to teach observational skills to medical students and improve their diagnostic skills. Its worth a read ! Like always, we want to be well balanced. Too much swinging of pendulum towards one side is harmful not matter which side we go!

Find the article here
Posted by Kenar D Jhaveri( kidney 007) at 5:34 AM No comments:


TRUE OR FALSE: LITHOTRIPSY CONCURS A HIGH RISK OF LIFETIME DEVELOPMENT OF HYPERTENSION AND DIABETES.

What is the data on this? Does Shock wave Lithotripsy cause high risk of HTN and Diabetes?

Human studies have shown that this therapy can leading to hemorrhaging and edema in the kidney.  As the dose increases, perhaps chronic scarring might ensue. Elve et al prospectively studied 228 patients with small calculi < 15nm and a control group. Followed for 2.2 years, found that there was no statistical significance in hypertension incidence. Another group found similar results. In a report of 578 patients who had undergone this, att a mean follow-up of 19 years, hypertension was significantly more prevalent in the lithotripsy group.Mayo Clinic researchers reported in the 2006  that patients who undergo this procedure are nearly four times more likely to develop diabetes and face a nearly 50 percent higher risk of high blood pressure over the following decades than those getting alternative treatment( retrospective study). In a more recent study, in a large, population-based cohort, the long-term risk of developing DM was not increased in persons who underwent this procedure to treat their kidney stones. Lithotripsy using the HM-3 was not associated with increased DM or hypertension in a Canadian study from 2011 as well.

Perhaps the jury is still out on this association.

1. Initiating cyclophos + steroids + plasmapheresis in all anti GBM GN except those who are on dialysis at presentation and have 100% crescents in a good sample and do not have pulmonary hemorrhage( 1B)
2. No maintenance therapy is needed for anti GBM GN( 1 D)
3. Defer kidney transplantation after anti GBM GN until anti GBM antibodies have been undetected for minimum of 6 months ( not graded)