Neurohypophyseal diabetes insipidus: Autosomal Dominant, they retain some limited capacity to secrete AVP during severe dehydration, and the polyuro-polydipsic symptoms usually appear after the first year of life, when the infant’s demand for water is more likely to be understood by adults.

Delayed onset of disease and can get worse with age.  The gene mostly involved is AVP gene.
X-linked NDI: Affected male patients do not concentrate their urine after administration of AVP. Because this form is a rare, recessive X-linked disease, female individuals are unlikely to be affected, but heterozygous female individuals can exhibit variable degrees of polyuria and polydipsia because of skewed X chromosome inactivation.  The gene mostly involved is AVP2 gene. V2 receptors have been tried as chaperone medications as a trial to help overcome the misfolding that happens as a result of the gene mutation and helps in NDI.

Autosomal recessive NDI: Some cases have been identified. They have defect in the AQP2 gene.
AQP2 mutations that are responsible for autosomal recessive NDI are characterized by misrouting of the misfolded mutant proteins and are trapped in the endoplasmic reticulum.
Autosomal Dominant linked NDI: Both males and females affected. A patient who presented shortly after birth and it is a defect in the AQP2 channel gene.

A nice review can be found at JASN and NDT
Posted by Kenar D Jhaveri( kidney 007) at 6:35 AM No comments:

Pathology and Nephrology: A combined force!

Some interesting historical points from the review:
1. The first pathologist who used nephron dissection as a primary means for studying renal diseases was Dr.Jean Oliver
2. Kidney biopsies were used for tumors as early as 1930s
3. The earliest reports to use in renal diseases were in 1950s by Dr. Iversen and Brun from Denmark
4. Pirani-Kark and Muehrcke team from Univ of Chicago did the first groundbreaking clinical-pathological studies to start the era of kidney disease pathology.
5. The CIBA symposium ( London) in 1961 was the first nephrology-pathology meet that sparked enthusiasm and exchange of ideas and experience of leaders worldwide in this field.
6. Hepinstall's Pathology of the Kidney became the landmark book for nephro-pathology.  Dr RH Hepinstall from Great Britain wrote the first edition in 1966. He also served as president of the American Society of Nephrology in 1972. Yes, he is one of the two pathologists who served as the president of ASN.
7. Dr. Ramzi Cotran served as ASN president in 1995.

Check out the entire manuscript at AJKD.
Posted by Kenar D Jhaveri( kidney 007) at 6:44 AM No comments:

Long term renal toxicities from chemotherapy in cancer survivors is likely to exist. A recent study in CJASN 2013 looked at this very question. Over 700 childhood cancer survivors were reviewed and function was assessed regarding kidney function loss.  Risks were then identified.
What factors were major predictors of loss of GFR later in life after experiencing treatment for childhood cancers?

In the NEWS: Acute tubular damage from synthetic cannabinoids

A recent report from CDC has suggested that there have now been several cases reported of acute renal injury( some requiting dialysis) from synthetic cannabinoids such as K2, spice. It all started when the cause of kidney failure was unknown and links were being made with fluorinated synthetic cannabinoids.  Kidney biopsy of some cases suggested tubular toxicity and interstitial nephritis which is the classic finding seen with most nephrotoxic agents. No reversing agents have been identified.
The full report can be found at the CDC website.  Prior cases of these reported are from n/v leading to pre renal AKI only.

Interestingly, there have been some basic science studies suggesting the opposite effect in the kidney. Some have even considered this to use for pain and symptom management of CKD.

Nevertheless, the synthetic forms are now rapidly appearing in the market and kidney disease should be considered as a toxic effect of these agents and kept in mind in the differential diagnosis of AKI( especially ATN/AIN) of unclear etiology in the right setting.
Posted by Kenar D Jhaveri( kidney 007) at 7:03 AM No comments:

An interesting concept in science is biomimicry. It is the science that takes inspiration from unique designs and processes in nature to help humans.

Learning from the Ursidae( hibernating bears) about how they remain metabolically quiet and yet have no major complications can help science. If we had 6 months of bed rest, we would have heart failure, blood clots, muscle wasting, hypercalcemia and bed sores.  Interestingly, these bears have no heart failure, no blood clots, only have 10-15% reduction in muscle mass and only have fat breakdown. They remain without bed sores and normocalcemic.  Why do these bears not get azotemia in these settings? They have marked reduction in GFR when they hibernate, yet no azotemia? Why?

A recent article in Kidney international looks at this very concept and proposes some hypothesis to test.
Posted by Kenar D Jhaveri( kidney 007) at 9:40 AM No comments:

Labels: basic science, In The News 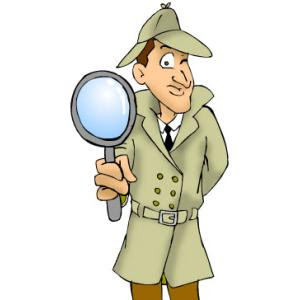 ASN Kidney News has the next issue of the series of Detective Nephron. He returns this time with a novel glomerular disease case. Check out on pages 22-23 of the Feb 2013 issue of ASN Kidney News
Posted by Kenar D Jhaveri( kidney 007) at 5:00 AM No comments:

Nephrologists often use a rule of thumb that the urine protein: creatinine ratio—a unitless number—approximates the 24-h protein excretion in grams. This approximation is based on the assumption that the 24-h urine creatinine excretion is approximately 1000 mg.
There are few instances when this might not be true and hence in those cases the Total Protein/creatinine ratio can be misleading and give false results.

1. AKI:- As there is decreased clearance of creatinine, the total protein/crt ratio can have now a falsely lower denominator and hence leading to a larger ratio. This can possibly mistake some cases of just pure AKI with AKI now with nephrotic syndrome.

2. Increased Muscle mass: In cases of gross increase in muscle mass, the ratio can grossly underestimate the total ratio.

A 29 year old pregnant female with a serum crt of 0.8mg/dl and eGFR of 90cc/min.
During Pregnancy, GFR increases by 40-65%, as a result, crt will fall and be lower than usual state of health in most part of pregnancy.

Per studies, the MDRD formula underestimates the true GFR on the basis of inulin clearance by more than 40ml.min.  Another study found the bias to be less- around 20cc/min. There are currently no published data on the accuracy of the MDRD formula in pregnant subjects with GFR <60 ml/min. Given these issues, 24-h urine collection for CrCl remains the gold standard for GFR estimation in pregnancy. In the above case, it may reflect diminished renal function in the setting of pregnancy.

Here is a concept map of hypophosphatemia based on two great articles. Click on it to get a larger view. 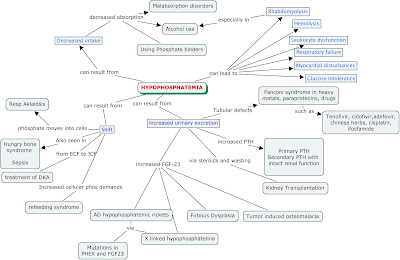