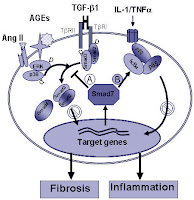 The Feb 2010 issue of Annals reviews fibrotic diseases, cellular mechanism and possible treatment options.
This is a good read since we deal with fibrotic diseases a lot and perhaps things are on the horizon for our patients.
Extracellular matrix deposition that becomes abnormal leads to fibrosis in lung, liver and kidney diseases  and other diseases as systemic sclerosis, NSF and GVHD as well.  TGF-B has been identified as a major player in this journey to halt fibrosis.
The article describes the basic two classical and non classical pathways of TGF-B and how downstream it leads to SMAD activation that leads to collagen production and deposition.  Ideas and approaches used so far in mice and some human models is to inhibit TGF-B via the tyrosine kinase inhibition(imatinib), blocking TGF-B production and activation(pirfenidone), inhibition of other kinases involved blockage of Angiotensin II( ACEI, ARBS).
There are some drugs out there already to be used in lung fibrosis. For renal damage and fibrosis, we have yet to see which one will work.  Targeting the tyrosine kinases we have to watch carefully as there might be anti VEGF effect as well and then leading to TMA like syndromes as we are seeing with sunitinib, sorafenib and others as well.  Just like VEGF, is TGF-B a bimodal molecule and perhaps too much and too little is bad for you and altering it will not be without consequences. There is also data that TGF-B is a tumor suppressor in early stages and promote tumor genesis later on.  This has to be kept in mind.  Is it the reason why ACEI and ARB combination can lead to more cancers as noticed recently. Another good article is linked here: It reviews the role of TGF-B in Renal diseases and an oncologic view of the TGF-B is linked here.
Image source: Frontiers in Bioscience 4984-4992, May 1, 2008
Posted by Kenar D Jhaveri( kidney 007) at 8:42 AM