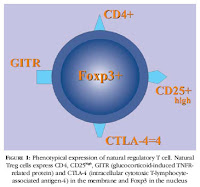 Besides the specifics of epigenomic imprinting in the mehylation region of the T cell region which might be critical for T cell lineage, this paper I thought highlighted something very alarming. One is that TGF-B is an important promoter of T reg cells. There are drugs out there currently under development that are inhibitory to TGF-B for anti fibrotic effects. Again, we have to think  of these molecules as possible bimodal and perhaps they have different functions in different disease entities.
Second is that the dendritic cells might be important players in the long term survival of Tregs. Since there are studies that show that the patients that has increase Foxp3+ Tregs, those patients post transplant do better.
Perhaps, sustaining that positive effect should be the goal in transplantation. We can perhaps then achieve tolerance. Perhaps!!
This is interesting to me as a clinician as there might be promise ahead for tolerance.
The article source is here.
A review of the Foxp3 T regs is nicely shown in recent Nature Immunology as well
Image source: http://www.scielo.br/img/revistas/abd/v81n3/e10f1.jpg
Posted by Kenar D Jhaveri( kidney 007) at 9:03 AM