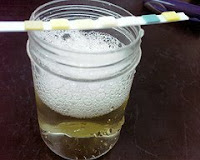 intermittent proteinuria and that lead to a discussion of orthostatic proteinuria?
What is that and is it important?
Orthostatic Proteinuria is an increase in protein excretion in the upright position and normal excretion when supine.
In general, mostly seen in teens and young adults and people who do extensive exercising.
Possible pathogenesis are:-
1. Normal:- as described as early as in 1960s that this is normal and worsened by hemodynamic effects and increased angiotensin II.
2. Glomerular disease:- subtle changes in the basement membrane and possible mesangial cellularity might explain it. The above linked paper postulated that in these patients
3. Renal vessels being effected leading to the Nutcracker syndrome
4. Page Kidney
http://www.ncbi.nlm.nih.gov/pubmed/3965775
http://www.ncbi.nlm.nih.gov/sites/entrez
Posted by Kenar D Jhaveri( kidney 007) at 9:05 PM