Prolia or Xgeva, Denosumab and The Renal world! 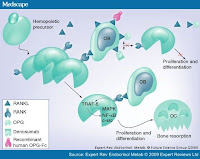 Bisphosphonates are established treatment for metastatic bone disease in many cancers.  Recently the RANK ligand inhibitors had come into the picture for treatment of osteoporosis under the name of Prolia. Osteoclasts are activated in part by a signal made by osteoblasts called RANKL (receptor activator of NFkB ligand), which binds to its receptor on osteoclasts( see figure below). Denosumab(Prolia) is a monoclonal antibody against RANKL. It thus prevents activation of osteoclasts and the initiation of resorption. Denosumab is given every six month subcutaneously. A trial called the Freedom trial( listed below in references) enrolled over 7800 women between the ages of 60 and 90 with a T score on their dexa scan between -2.5 and -4.0, denosumab prevented the radiological evidence of vertebral fractures, as well as reduced the risk of hip fractures, non vertebral fractures. It also increased bone mineral density at the lumbar spine and hip.  The side effects were not many. No patients with ESRD were included, but there were a fair amount of CKD stage II, III and IV patients in the trial and in those subgroups, fractures were less as well in the Prolia arm. Following that, three recent randomized trials also showed denosumab under the trade name Xgeva showed non inferior to bisphosphonates in prostate cancer and breast cancer and metastatic cancer to bone and myeloma patients in terms of skeletal related events and preventing bone lesions. And perhaps even preventing hypercalcemia of malignancy??? 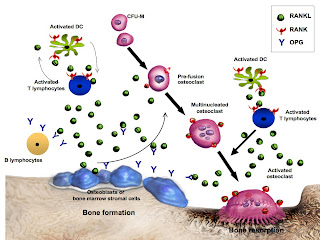 The studies are interesting and apparently renal monitoring is not needed.  Compared to zoledronic acid(comparison agent), no renal monitoring is required for these agents.  It appears at closer look at the trials that the renal events were similar in both with no significant statistically.
For us these trials might be important to follow as perhaps this agent might be something that might be used in the near future and we have to monitor for any renal side effects. Besides, it causes significant hypocalcemia in normocalcemic individuals as a common side effect. Hence, it might be an interesting agent to consider in treatment of malignancy associated hypercalcemia. A more recent trial in the US on using this agent that included few myeloma patients as well showed non inferiority to bisphosphonates. Overall survival and disease progression were similar between groups. Hypocalcemia occurred more frequently with denosumab.  Osteonecrosis of the jaw occurred at similarly low rates in both groups. Renal adverse events and elevations in serum creatinine were more in the bisphosphonates arm.

Denosumab represents a potential novel treatment option with the convenience of subcutaneous administration and no requirement for renal monitoring or dose adjustment.
Let’s keep a close watch for it. For now, it is expensive and can only be given as an outpatient basis in the oncology clinics.