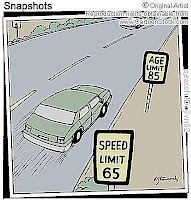 Yesterday, we discussed an interesting topic called cellular senescence and how it matters in renal disease.
1. What is senescence: some cells drop out completely, some persist in damaged form (atrophic tubular cells) and others remain as senescent cells that show limited function and are unable to proliferate.
2. These senescent cells compromise the integrity of the tissue as a result and this is part of the process of aging.
3. The cells have altered morphology, greater heterogeneity, expression of associated ß-galactosidase (SA-ß-GAL) & accumulation of lipofuscin granules.
4. Several candidate genes p21 and p16 have been also reported to play a role in senescence
5. A special case for a possible interaction of underlying renal senescence imposed stresses might be the poor performance of transplanted kidneys from older donors, particularly cadaveric donors. Poorer graft survival might be secondary due to older kidneys with increased senescent cells. These showed increased P16 activity and increased IF/TA.
6. Studies have shown that certain things stress and cause accelerated senescence. Hypertension is one of those things.
7. Telomere knock out mice showed less of chronic changes and less senescent cells. Perhaps a future pathway to NOT age????