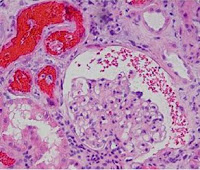 A commonly used agent is warfarin for anticoagulation.  Recently there have been some published case reports of warfarin induced nephropathy(WRN). More recent, an original article on the incidence and prevalence of this entity in CKD has also been mentioned.

What is this entity? High INR was associated with a rise in crt in biopsy of patients showed glomerular hemorrahge and renal tubular obstruction with red blood cell casts.  A recent retrospective review of over 15000 patients who were on warfarin and had an INR >3 and creatinine at the same time were reviewed.  A presumptive diagnosis of warfarin induced toxicity in the kidney was made if crt increased by 0.3mg/dl in 1 week after INR was >3.  WRN occurred in 20.5%,and 33% of the patients with CKD.  The mortality was also higher with people with this entity.  Other diagnosis that could have cause an acute renal injury were considered in those 4006 patients and carefully ruled out by looking at the chart.

The study highlighted few important points:
1. This entity should be considered in the differential diagnosis with AKI on warfarin
2. The risk factors to make this risk higher were age, DM, HTN and CVD but most important risk factor that doubled the risk was CKD.
3. Average INR to show this entity was only 4
4. The higher risk of WRN in CKD patients maybe be more likely due to having a sub therapeutic INR
5. There is no correlation of WRN and level of INR
6. WRN has substantial decreased survival rate but unclear if this is purely from WRN or other co morbid conditions.
7. Glomerular hemorrhage leading to tubular cast obstruction leading to ATN is the most likely mechanism
RFN also blogged about this in 2010 at
http://renalfellow.blogspot.com/2010/08/warfarin-induced-aki.html
Read more at the following references:
http://www.ncbi.nlm.nih.gov/pubmed/21389969
http://www.ncbi.nlm.nih.gov/pubmed/20413993
http://www.ncbi.nlm.nih.gov/pubmed/19577348
Posted by Kenar D Jhaveri( kidney 007) at 9:41 AM