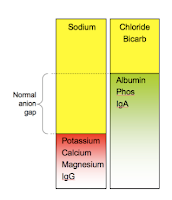 This weeks Kidney International's Whats your diagnosis section discusses a case of Diethylene glycol poisoning. ( image courtesy on left: Precious Body Fluids Blog)
Of all the alcohol poisonings, its important to distinguish which one you are dealing with. The article has a nice table that shows the similarities and differences of them.
Methanol poisoning usually has acute renal failure, met acidosis ( part of MUDPILES), and increased or normal osmolar gap; there is some neurological and visual disturbances.
Propylene glycol is usually seen with ativan drips, is seen with acute renal failure, metabolic acidosis and sometimes an osmolar gap but other findings are negative.
Ethylene glycol, another cause of metabolic acidosis and increased osmolar gap, you see with renal failure and + calcium oxalate crystals.
The Diethylene glycol poisoning is more rare but can happen as in this case. Its usually seen with acute renal failure, + metabolic acidosis and sometimes an osmolar gap but very frequently as noted in this article with neurological facial nerve pals and mild hepatitis.
Isopropyl alcohol is a classic one that has an elevated osmolar gap but no anion gap.
There is always something hiding in the gap. Even a low osmolar gap is abnormal.
take a look at this table I saw in Canadian medical association journal. I think that this table is a nice review.
Says it all. 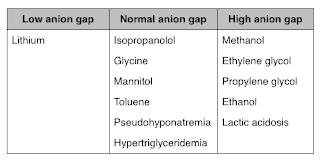