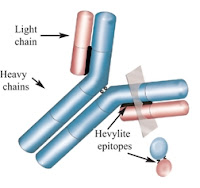 A recent review of the pathophysiology of light chain damage in the kidney suggests some novel findings.

1. Apoptosis is a feature of experimental monoclonal free light chains( FLC) induced renal injury in animals which might be underlying mechanism in proximal tubulopathy.
2. Cast nephropathy experimental evidence suggests that intraluminal casts formation is the proximate cause of AKI and the most likely first step in the progressive decline of the renal function.
3. When IV infusion of monoclonal FLC was given in rats, elevated proximal tubular pressures were noted and decrease in single nephron GFR with formation of intraluminal protein casts.
4. The FLCs optimal bind via their CDR3 receptor to the Tamm-Horsfall protein in the distal nephron.
5. A inhibitor of the CDR3 part of FLC in rodents inhibited the cast formation.
6. While chemotherapy is the most effective, increasing water intake, avoiding nephrotoxic agents when the FLC burden is high is extremely important.
7. Renal risk from myeloma is very dependent on the circulating monoclonal FLC rather than the M protein.
8. Advent of FLC assays have really helped the diagnosis and management of renal dysfunction seen in patients with paraproteinemias.

Figure reference: the binding site
Posted by Kenar D Jhaveri( kidney 007) at 6:52 AM