Consult Rounds: Hyponatremia and AKI- need CRRT- what do we do??

Hyponatremia correction is challenging but manageable.
Offering and prescribing CRRT in the ICU is also doable by most nephrologists.

You are called, “ anuric patient, Na 110, K 5.4, BUN 90, Crt 6.0mg/dl) and altered mental status”
Now you are confronted with correcting the Na slowly and providing good dialytic clearance as well given anuria and hyperkalemia.

CRRT has advantages in its ability to correct plasma sodium values in a predictable and slow manner. Compared with standard hemodialysis machines, where the lowest dialysate sodium concentration is 130 mEq/l, CRRT solutions can be customized to any desired sodium level, allowing for personalized therapy.

To act on these advantages and prescribe CRRT to target an increase in serum sodium no >6 mEq/L per day, there are three options: either (1) customize the CRRT circuit or (2) customize CRRT solutions. (3) add D5W infusion separate line with standard CRRT

In an article by Rosner et al, in CJASN, method 1 is well discussed using this figure- changing the post filter fluid or replacement fluid to sterile water( d5W) and rate calculated similarly as stated above. 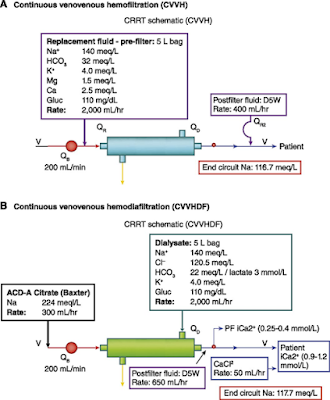 An important caveat, once desired Na is reached, D5W needs to be changed back to standard replacement fluids and or D5W drip discontinued.