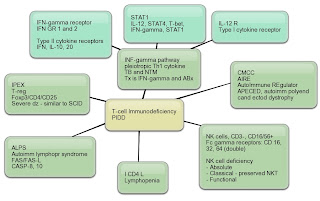 The correct answer is 2, or IPEX syndrome. great work everyone. What is IPEX syndrome and why do we care? The immune dysregulation, polyendocrinopathy, enteropathy, X-linked (IPEX) syndrome, a rare disorder characterized by multiorgan autoimmunity, often results in death in infancy. The above image is from an allergy immunology blog of Cleveland Clinic. It summarizes the T cell deficiencies diseases.  The IPEX syndrome results from mutations in the forkhead box P3 (FOXP3) gene, which encodes a transcriptional repressor considered to be the master regulator of differentiation in CD4+ regulatory T (Treg) cells. A nice case was first described in NEJM issue in 2009.
A missense mutation abolishes the T regulatory function FOXP3 positive T cells. The systemic autoimmunity in these patients with the IPEX syndrome is probably the consequence of defective Treg-cell–mediated control of immune responses.
This is important in the transplant literature as recently FOXP3 positive T cells in biopsy samples and in the urine of kidney transplant recipients have some value. Consider them to me " policemen" cells and if they are in good quantity and around during the time of rejection, the outcome will be better as they can keep the "troublemaker" T cells, the cytotoxic ones in check.
In a more broader senses, when we uses drugs that suppress T cells in general, are we also suppressing T regulatory cells that are good to have around? Perhaps!!
Another good reference for this in transplant patients is also in NEJM, link attached.
Posted by Kenar D Jhaveri( kidney 007) at 11:25 AM