Topic Discussion: Newer Gadolinium agents and risk of NSF? is it extinct? So are these safer? A large study published in 2017 was a prospective, international, multicenter, open-label study in 55 centers. Patients with moderate to severe renal impairment scheduled for any gadobutrol-enhanced MRI were included. All patients received a single intravenous bolus injection of gadobutrol at a dose of 0.1 mmol/kg body weight. The primary target variable was the number of patients who develop NSF within a 2-year follow-up period. A total of 908 patients were enrolled, including 586 with moderate and 284 with severe renal impairment who are at highest risk for developing NSF. Overall, 184 patients (20.3%) underwent further contrast-enhanced MRI with other gadolinium-based contrast agents within the 2-year follow-up. No patient developed symptoms conclusive of NSF.

Another study by Lauenstein et al, investigated gadoxetate disodium in 357 patients. No case of NSF was recorded. Another recent study by Amet et al investigated the risk of gadoteric acid in 255 patients on dialysis with no findings of NSF. In addition, Soulez et al reported 2 prospective 2-year studies in 534 patients with either stage 3 chronic kidney disease (CKD) or stage 4 to 5 CKD. No signs or symptoms of NSF were reported after administration of gadobenate dimeglumine or gadoteridol. Smorodinsky et al retrospectively evaluated 1167 patients with chronic liver disease where 72% also had some degree of renal insufficiency. They did not report any case of NSF.

A recent Canadian society published their analysis and concluded that “In patients with AKI and category G4 and G5 CKD (eGFR < 30 mL/min/1.73 m2) and in dialysis-dependent patients who require Gadolinium based contrast agentss-enhanced MRI, they can be administered with exceedingly low risk of causing NSF when using macrocyclic agents and newer linear agents at routine doses.”

Here are images online from medscape education that are very useful on this matter. 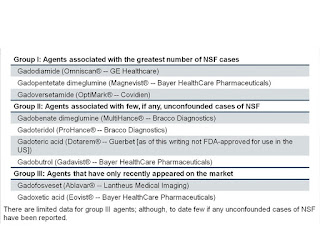 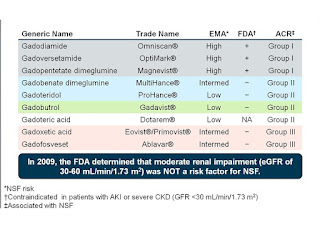 A lot of centers in the world are now carrying and using Gadovist and perhaps we won’t see any NSF?