In the NEWS: Credence, Rise of the Nephron Throne

A positive light at the end of the tunnel for nephrology, the Credence trial just got published this week in NEJM, put the glucoretics on top for diabetic nephropathy. When you search “credence” in the oxford dictionary it means” belief in or acceptance of something as true”.  I think the time has come to believe that SGLT-2 inhibitors are here to stay and are going to change the disease of diabetic nephropathy.

In summary, this large RCT was stopped early. At that time, 4401 patients had undergone randomization, with a median follow-up of 2.62 years. The primary outcome was a composite of end-stage kidney disease (dialysis, transplantation, or a sustained estimated GFR of <15 ml per minute per 1.73 m2), a doubling of the serum creatinine level, or death from renal or cardiovascular causes. The relative risk of the primary outcome was 30% lower in the canagliflozin group than in the placebo group. The relative risk of the renal-specific composite of end-stage kidney disease, a doubling of the creatinine level, or death from renal causes was lower by 34%  and the relative risk of end-stage kidney disease was lower by 32%. The canagliflozin group also had a lower risk of cardiovascular death, myocardial infarction, or stroke and hospitalization for heart failure. There were no significant differences in rates of amputation or fracture. 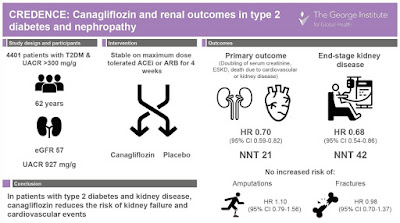 Some of the twitter world made some amazing comments on this

Susan Quaggin‏ @SusanQuaggin" 19 years since RENAAL and IDNT..followed by a series of negative trials...but the drought is over! New therapies for our patients with diabetic kidney disease are a reality - #CREDENCE marks the beginning of a new era in Kidney Medicine "#SockItToKidneyDisease"

And my personal favorite....

While this drug was developed and marketed to treat diabetes, it is more than that. Someone on social media world rightly said” We have an anti HTN and renal protective med that has a nice side effect of lowering your A1c” 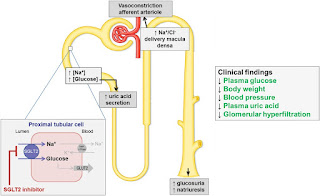 This is a nephrologist's drug! Finally, we have a positive trial in the making that is going to change the practice of nephrology. Diabetics, non-diabetics, HTN, CHF patients- all might benefit from this discovery!

Labels: diabetes, In The News