IN THE NEWS- HIVAN CONCEPT CHANGE? 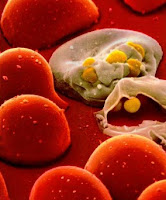 We believe that the lesion in HIVAN is collapsing glomerulopathy. Collapsing FSGS is believed to be a podocyte proliferation disease based on multiple studies done in rats and humans staining for podocyte proliferation markers and dedifferentiation markers.
A recent study in Am J of Physiology Renal Physiology is showing a novel concept. The investigators did a basic science study on role of epithelial mesanchymal transdifferentiation (EMT) in the development of HIVAN phenotype.  Their data showed that in mice, it appears that myofibroblasts are migrating from either glomerular or tubular sites and then proliferating. Series of stainings confirmed that EMT was happening and was contributing to the proliferative phenotype in HIVAN mice.
So its likely that in collapsing FSGS there is proliferation, but not of podocytes as once thought. So it still might be a podocytopenic process due to proliferation of other types of cells and leading to EMT causing this change.  Its a start of an out of box thinking of this process.
Hopefully this might shed some light and perhaps help in treatment of HIVAN in addition to HAART when it occurs.

Labels: glomerular diseases, In The News