This ASN 2021, I heard an interesting lecture and realized some novel associations with pre-eclampsia(PEC) and APOL1 gene mutations.

Here are some interesting findings.

1. Black women have a higher risk of PEC their White counterparts.
2. Reidy et all showed that it is the FETAL not maternal APOL1 renal risk variant that is associated with PEC in Black women.

3. Some other studies showed that PEC was associated with the maternal G1 and not the G2 allele

4. In Blacks in Ohio, INFANT APOL1 genotype was associated with PEC

5. Recent study in AJKD, found that APOL1 kidney risk variants in Black mother and infant pairs of women of African American origin had higher risk of PEC compared to Haitian women. PEC was higher with maternal and fetal APOL1 genotype discordance, an effect driven by the African American mother-infant pairs. 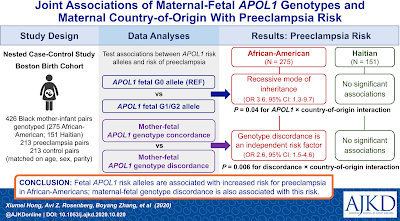 6. None of the published studies assessed if the mother’s APOL1 genotype conferred preeclampsia risk independently of the fetal APOL1 genotype, although in African Americans both the maternal and fetal APOL1 renal risk variants appear to increase risk if an APOL1 genotype discordance exists.

Overall, this is fascinating as we learn regarding the risk of PEC and APOL1 risk variants. It appears that fetal variants of the gene may be more important here.. the story continues to evolve... Stay tuned..