Osmotic nephrosis describes a morphological pattern with vacuolization and swelling of the renal proximal tubular cells.

What does the pathology show:
Usually there is acute tubular necrosis–like changes. Histologically, osmotic nephrosis is characterized by a focal or, less often, diffuse “clear-cell” transformation of proximal tubular epithelial cells showing isometric fine vacuolization of the cytoplasm . The straight part of the proximal tubule primarily is involved and, in severe cases, also the convoluted part. Severely affected tubules are often seen side by side with normal-appearing tubules. Distal tubules and collecting ducts are more or less unchanged
Classic known causes of this entity are:

How does one differentiate this from vacuolization seen with tacrolimus and cyclosporine? Is that a form of osmotic nephrosis?

Renal Pathologist Dr Lynn Cornell nicely describes this on twitter with these images. The image below shows isometric vacuolization in CNI toxicity. This leads to have focal tubules with this change( see arrow) 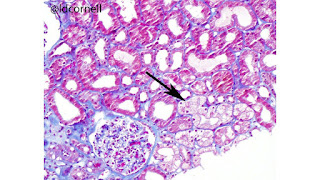 In osmotic nephrosis, tends to show vacuolated cytoplasm in tubules diffusely( see below)
Osmotic nephrosis describes a morphological pattern with vacuolization and swelling of the renal proximal tubular cells. 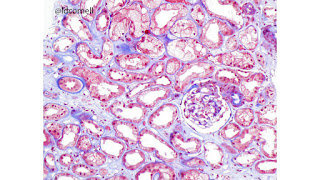 In addition, In paraffin sections, the isometric vacuolization seen in patients with calcineurin-inhibitor toxicity may be indistinguishable from osmotic nephrosis. However, electron microscopy shows dilated endoplasmatic reticulum as the cause of vacuolization in the former.  Osmotic nephrosis cannot be differentiated from lipid storage in tubular cells (foam cells), as seen in patients with nephrotic syndrome, liver failure, or intoxication. In such cases, foam cells also are often found in large amounts in the interstitial space. This does not occur in osmotic nephrosis. 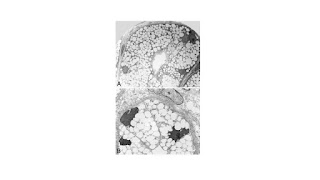 The above image shows  osmotic nephrosis in a kidney biopsy specimen. (A, B) Tubular cross-section with seemingly no lumen. Epithelial cells are massively swollen, cytoplasm is completely filled by vacuoles of about the same size (isometric vacuoles), and nuclei are displaced to the base of the cells and distorted by adjacent vacuoles( source https://www.ajkd.org/article/S0272-6386(07)01592-2/pdf